5 Ways To Handle Any Holiday Disaster 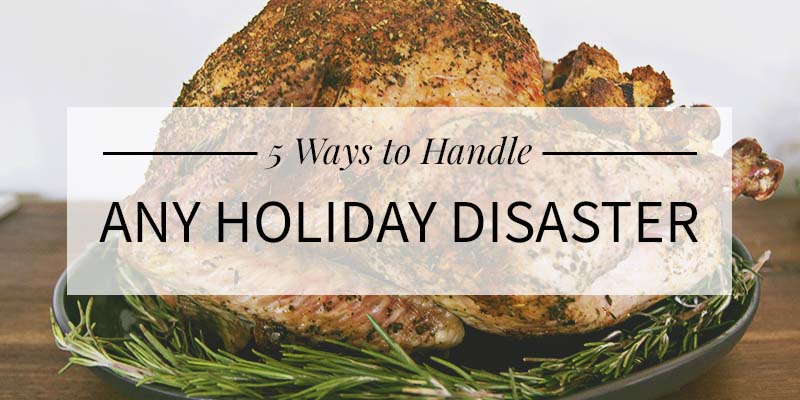 I always have an image in my mind of how our holiday is going to go: the food will be delicious and will be ready on time. Our family will look flawless in their season-appropriate attire, and I will look fresh and energetic and not like I’ve been slaving in the kitchen for the past few days with a demanding preschooler on my heels. The table will be beautifully set, our conversation will be stimulating, and everyone will ooh and ahh over the tiniest details that no normal person would notice.

Maybe you’re not as delusional as I am. And honestly, I know holidays like that are pretty unrealistic. But a girl can dream, right?

Needless to say, that is not how our most recent Thanksgiving transpired.  This was the first Thanksgiving Austin and I have hosted, and I have a feeling we’ll never forget it. And no, not because it was picture perfect.

It was, to say the least, a complete disaster.

It all started at 5:30 am, when Austin woke me up to say there was a…situation downstairs. I ran down to our first level to find our laundry room and family room completely flooded, and what’s more, boiling water was bursting from our hot water heater. Thus began our first official Thanksgiving!

I won’t bore you with the details, but the rest of the morning was spent stemming the flow, cleaning up, and running around trying to prevent any further damage. Of course, the hardware stores were all closed and the plumber was going to charge us an arm and a leg to come out on a holiday. We managed to deal with everything the day threw at us with what (I hope) was a gracious and forgiving attitude, and still pulled off a beautiful meal for Austin’s parents.

We managed to deal with our holiday disaster without biting each others’ heads off, which is the most we could ask for.  Here’s how we did it… 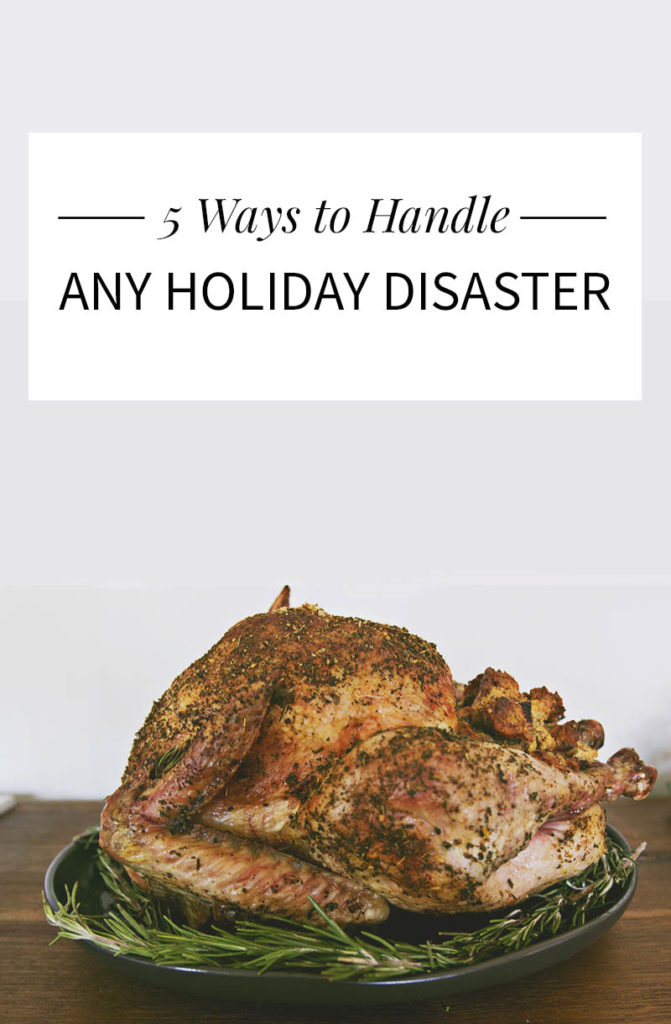 1. Take a deep breath. Calmness is your best friend. You won’t be able to think rationally or be able to problem-solve if you are screaming, crying, or snapping at your family. No pulling your hair out or bemoaning the situation. Just be calm, and deal with it.

2. Try to have some perspective. For instance, while I was fretting over the outcome of the Thanksgiving meal I had been cooking for the past two days, my fiancé lovingly reminded me that heading off the water damage was actually the more pressing matter. Our holiday meal might be ruined, but ruined floors and baseboards would be much, much worse. So I (rather begrudgingly) stopped cooking and we all took turns laying down towels and vacuuming up the water.

3. Roll with the punches. Make the best of the situation you are given! We had to turn the water off for most of the day, which presented the rather large problem of finishing the cooking. More importantly (to me, at least) was the prospect of washing and stuffing a raw turkey with my bare hands in a kitchen that I could no longer sanitize. I was terrified of giving everyone food poisoning—especially since this had happened at a previous family Thanksgiving (where thankfully, I had not cooked). I sent my in-laws out for lots of hand sanitizer and bottled water, which we boiled on the stove. And, praise the Thanksgiving gods, the food came out perfect. And nobody was bent over a toilet the next day.

4. Keep your sense of humor. Sometimes life likes to play little cruel jokes on you, and instead of being bitter about them—especially around the holidays—you just have to laugh. Austin and his dad spent the day after Thanksgiving installing a new hot water heater, which neither of them had ever done before. Hours and countless trips to Lowe’s later, after they had finally done the impossible and got everything working again and were congratulating each other on their ingenuity, they realized that we hadn’t needed that new $400 hot water heater after all!  We had only needed a new valve, which would have cost about $10 and taken as many minutes to replace. Did they get angry? Nope! They laughed it off. And now we have a great story about the first thanksgiving we ever hosted.

5. Look for that silver lining. Believe me, you can find one! We are selling our house next year, and are telling ourselves that a brand-new hot water heater is a great thing to add to our listing.  Austin learned a new skill, and if this ever happens again he’ll know how to handle it. Sometimes the silver lining is in the “what ifs”—what if we had spent the holiday in New Hampshire like we had originally planned? The damage would have been much, much worse for sure. The tank might have even burst! And what if we hadn’t had that carpet shampooer to vacuum up all the water? We would be up to our eyeballs in mold, and would have had to spend a whole lotta cash on a new floor.

In the end, how we spent the day wasn’t what was important. We were together—we laughed, we learned, and we enjoyed ourselves despite the difficulties.

And some things did turn out like my picture-perfect daydream:

Cocktails are necessary during any kind of holiday disaster. Look for a recipe on the blog soon! 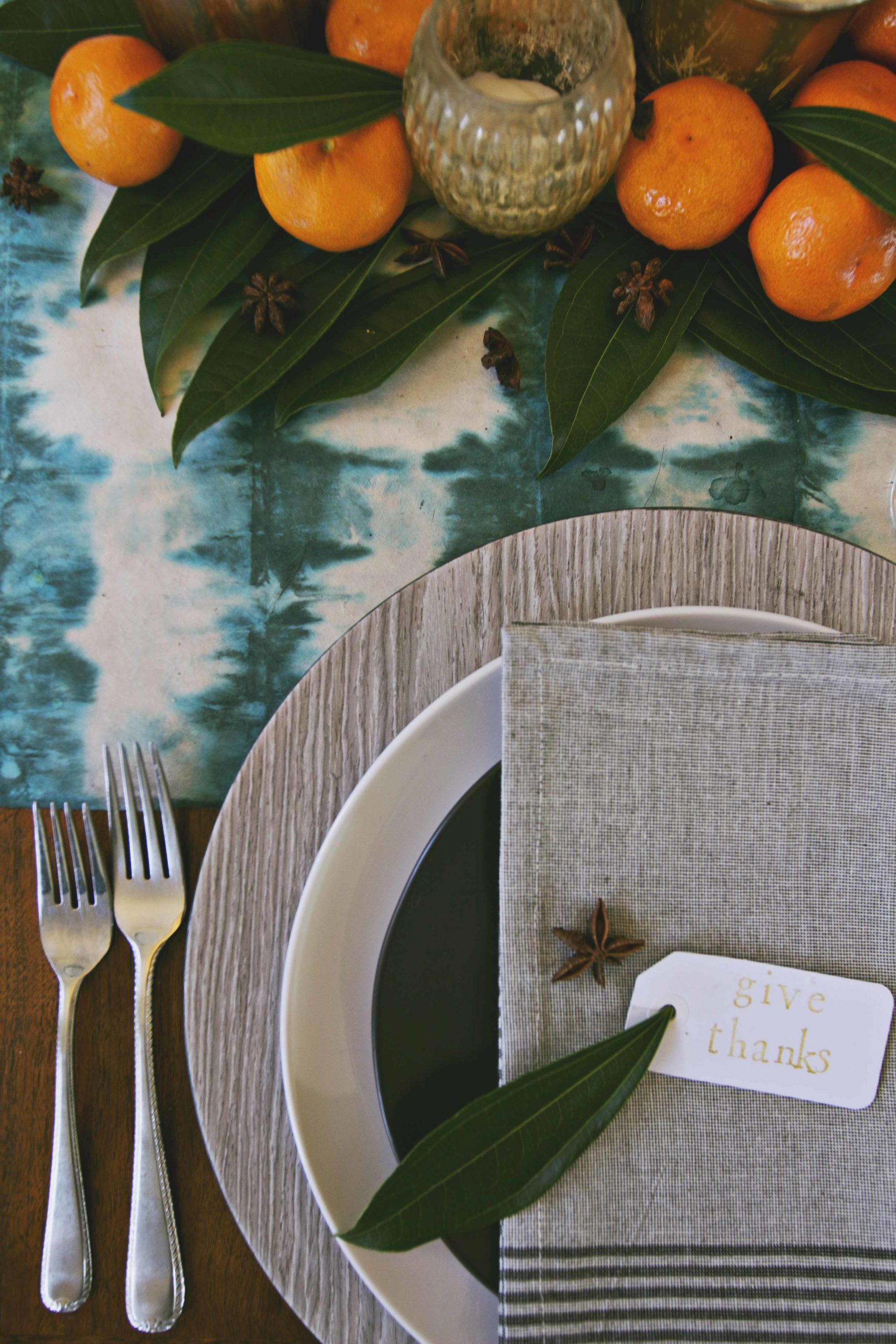 Our Thanksgiving table, round 2 (see the first version by clicking the photo)

I sincerely hope that your holiday was much more relaxing, and that if you’re ever in a situation where things don’t go quite as planned (Christmas is coming, after all), you’ll find these tips helpful!

Have you ever had a disastrous holiday? What happened, and how did you handle it?